This year’s ski trip was very exciting. The drive up was fairly fast. About roughly 40 people came including parents and siblings. Here is how skiing went.

This year the weather was very warm causing the slopes to be slower. Which was good for people trying out the harder slopes. Josh, Paul, Zack, Evan, and Khalil got there snow sports merit badge. It was really fun to watches skiers ski across water. After we got done with skiing we had mass. This mass was different. Instead of having a homily father explained the mass as it went on. I couldn’t tell if that made it longer or shorter, but I learned a lot. Then after mass we went back to the hotel where we had pizza and soda for dinner. After that we all either went swimming or to our rooms to relax. All in all it was great trip.
Posted by Christopher Williamson at 11:40 AM No comments:

Citizenship in the Community

Citizenship in the World

At the Klondike Derby and the latest troop meeting, Mr. Walters talked to the boys about the Campfire Ash ceremony.  If you are interested more information can be found here and a log can be found here.
Posted by Christopher Williamson at 7:52 PM No comments:

This Klondike Derby was a very eventful one as we had the most scouts at a Klondike in a very long time. It was very cold so I believe the new scouts received their polar bear patch and we had a lot of fun. Setting up camp was a difficult process because we had to teach the younger scouts what to do but they caught on quickly. We only used one dining fly which surprised me. For dinner we had grilled cheese which kinda becomes a theme.

The entire day we had to pull a sled around. Luckily we had wheels. The events were tricky but we figured them out. The junior scoutmaster coffee patrol won the compass award. Along with the compass event there were others events like fire starting, first aid, slingshots, and more.  For lunch we had grilled cheese again.

The race had 5 heats not including the final race between the winner of the first 5 heats.  Each of our patrols were eliminated in the first round. It really was fun! 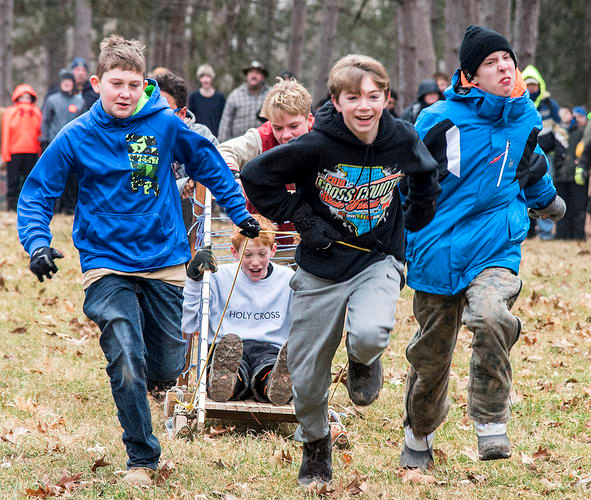 After the race we all went back to camp and changed into clean clothes. Then we went to the dining hall where Father Mike had mass. For once it was a short one.

It was very cold which affected morale negatively.  However the troop pulled thru and everyone who stayed two nights got their polar bear badge.

Posted by Christopher Williamson at 5:22 PM No comments: